The Oswego City School District has prided itself on being a collaborative community to help complete its district-wide mission of being student-centered and its vision of having students be fully prepared and life ready when they graduate from Oswego High School.

One way this has been achieved is through a mutual love of music and collaborative approach to learning songs and larger ensemble performance. That was proven during the first-ever combined pep band performance of the traditional OHS band students, who effortlessly worked alongside sixth-grade band students from Charles E. Riley, Fitzhugh Park and Minetto elementary schools. The brainchild of OHS band teacher Steve Defren, the collaborative effort during a recent OHS girls’ varsity basketball game was a way for the young instrumentalists to learn about musical experiences beyond what they had achieved in fifth- and sixth-grade combined band.

Kris Jorgensen, CER and FPS band teacher, said the elementary students also needed “music that uses the more advanced skills they are learning in lessons.” After a few weeks of practices at the elementary students’ respective schools, the combined musical skills were showcased during time outs, celebratory occasions and half-time during the basketball game.

Jorgensen said the success of the opportunity opened opportunities up for future sixth-grade band students to participate in the high school pep band during multiple games next school year. On behalf of the OCSD music department, Jorgensen thanked all the involved families and OCSD music program enthusiasts for continuously supporting the arts.

As the Oswego City School District celebrates March as Music in Our Schools Month, there are a few collaborative concerts scheduled. For more information, visit the district website at www.oswego.org. 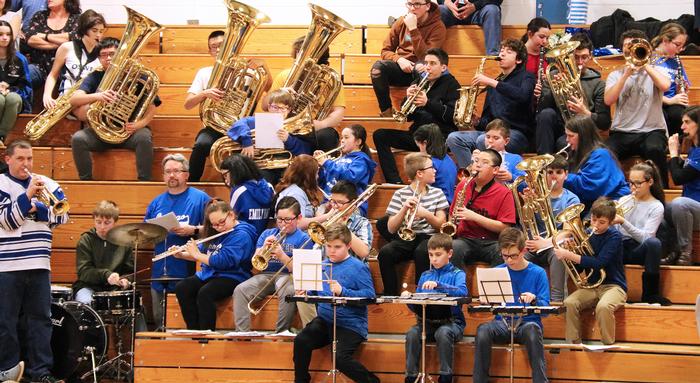