Leighton Students Battle It Out with Books

Student book lovers at Leighton Elementary School recently enjoyed some friendly competition over intricate details about literary selections a part of the annual Battle of the Books event.

Third- and fourth-grade teams first battled one another, followed by the fifth- and sixth-grade teams. All participants read 10 books cover-to-cover and spent months studying finite information to prepare themselves for any possible question about each book. Teams had 30 seconds to answer a total of 16 questions during their competition, where eight points were awarded for a correct oral and written response or five points were awarded for the correct title only. The event was organized by library media specialist Elizabeth Russell.

Cheers, applause and expressions of excitement filled the school’s all-purpose room during both competitions when questions were answered by team members correctly, or when teams were stumped. With a total 112 points, third- and fourth-grade team “Where the Wild Books Are” won. The team’s members included: Lorelai Nelson, Megan Campbell and Phiona Buck. The winning fifth- and sixth-grade team also with 112 points was “Read Like Your Mom,” whose members included: Grace St. Onge, Elizabeth Kropf and Abby Geroux.

Russell commended all battle participants for their commitment to reading beyond their regular schoolwork and she encouraged everyone to keep reading and learning. 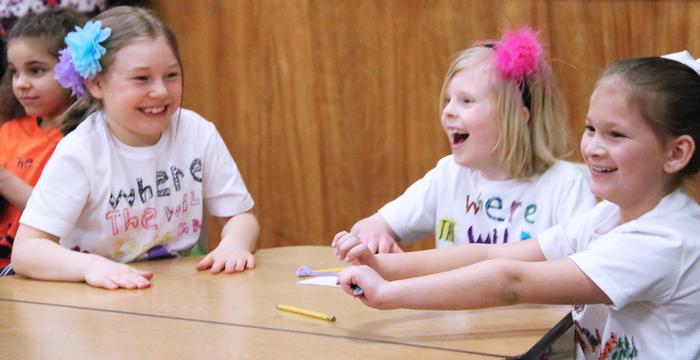