Male and Female Athlete of the Year Nominees

The Oswego City School District Athletic Department has announced candidates for both Male and Female Athlete of the Year 2020.

Athletic Director Rhonda Bullard said each student athlete has embodied dedication, leadership, hard work, coachability and sportsmanship; all of which have “captured the attention of our coaches, making them all deserving of this title.” The Male and Female Athlete of the Year honors are sponsored by the Buc Boosters, and all candidates are determined by OCSD’s athletic coaches.

The Male and Female Athlete of the Year 2020 will be announced during the annual Senior Athlete Awards Ceremony, organized by the Buc Boosters. The event will be held at the Midway Drive-in, in Minetto.

Bullard said the district is proud to recognize the following Female Athlete of the Year nominees: Katie Fierro, who played soccer, hockey and lacrosse. Fierro said that being a Buccaneer athlete has taught her the importance of playing team sports, time management and leadership skills, all of which transfer off the field and rink. She said she will miss playing sports with her peers and sister but is looking forward to attending SUNY Oswego where she will study childhood education and play lacrosse. Fellow honorees, Molly Fitzgibbons, participated in cross country, indoor track, outdoor track, hockey, soccer and volleyball. Not only have OCSD athletics allowed her to meet great friends, but they also helped her found a deep love for running. While she will miss her teammates the most, Fitzgibbons said she looks forward to attending Williams College, where she will participate in cross country and track.

Their peer, Miranda Gilbert, participated in cross country, indoor track, outdoor track and soccer.  As Gilbert looks forward to the next chapter of her life at Siena College, where she will concentrate on liberal arts and participate in cross country and track, she said she will miss her Oswego High School teammates and coaches.

“Being a Buc Athlete has given me lifelong friends, teammates that act as a family, and a plethora of lessons that carry on into the athletic, academic and personal aspects of my life,” she said.
Rounding out the female nominees is Julia Roman, who spent time at OHS playing soccer, hockey, lacrosse and track. Roman said she has valued the friendships that have evolved from being on various OHS sports teams, and while she will miss her friends, coaches and high school game days, she said she looks forward to attending Western New England University where she will study biology and play hockey.

Male Athlete of the Year nominees include Carson Colucci, who played hockey, lacrosse, football and golf. Being a Buccaneer athlete to Colucci has meant learning “lots of lessons and meeting great people who have developed me as a player and person.” He will miss playing sports with friends that he grew up with his whole life, but is excited to attend SUNY Brockport, where he will play lacrosse. Fellow honorees, Christian Kerfien, played football, soccer, wrestling and volleyball as an OHS athlete. Kerfien said the biggest takeaways he’s had as an OHS athlete are the development of his teamwork and cooperation skills.  While he will miss the support from his teammates, coaches and the athletic office, he is ecstatic to attend SUNY Oswego to study criminal justice and to wrestle.

Riley Mahoney is another Male Athlete of the Year nominee, who spent time as an OHS athlete on the volleyball, basketball, lacrosse, football and track teams. Mahoney said that being a high school athlete has impacted his life by giving him “an escape from the stresses of school and made me into the person I am today.”  Nothing in his life, he said, will ever match what was created by the environment of all the different sports he joined at OHS. He will attend Keuka College, where he will play volleyball.

The final Male Athlete of the Year honoree is Jack Rice. He played soccer, hockey and lacrosse. Rice said that he has been proud to develop various connections, lasting friendships and the important lesson that hard work and effort are necessary for everything in life. Rice said he will miss the bus rides home from games and playing under the lights on Wilber Field. He will attend Salisbury University, where he will play lacrosse.

Bullard said all nominees “have done, and will continue to do, great things.”

“No matter which female and male are named Athlete of the Year, they are all winners and will always be part of the Buccaneer Athletic Family,” she said. 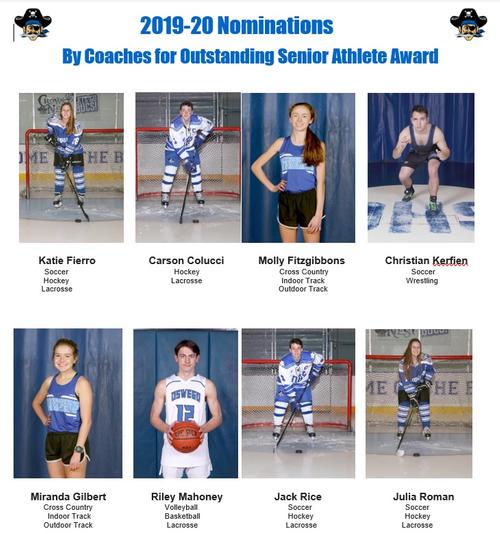